The Albany-Fraser Mobile Belt is a highly prospective but underexplored frontier, as demonstrated by the considerable success AngloGold Ashanti had with the discovery and development of the 7.1Moz Tropicana gold mine (currently jointly owned by AngloGold Ashanti and Regis Resources Ltd Joint Venture).

On taking ownership of the project in early 2020 the Company quickly set about securing land access agreements with local landowners. With those in hand an auger geochemical sampling program was completed in late 2020, which extended the strike of gold anomalism at Anomaly A to 1,200 metres.

Following the success of the auger sampling program, reconnaissance aircore drilling was completed during 2021, returning thick gold intersections at Anomaly A. Of more importance however was the end of hole multi-element geochemistry that displayed pathfinder elements similar to those observed in early exploration work at the Tropicana discovery, hinting at the possible presence of a large mineralised system.

A short program of 100-150m deep RC drill holes was completed in early 2022 with immediate success, the first hole intersecting 23m @ 5.09g/t Au from 13m (22CVRC001). Subsequent step-out holes returned similar broad zones of mineralisation and the Company has put in place an aggressive program of RC and diamond drilling to expand the footprint of mineralisation and gather structural information. 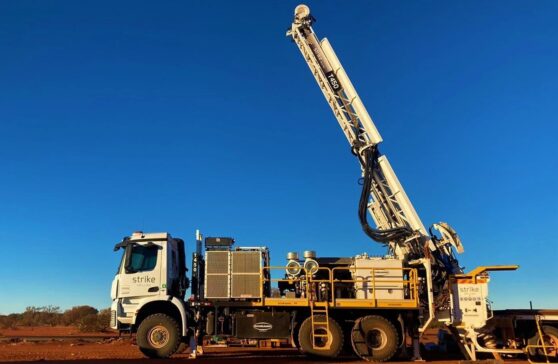